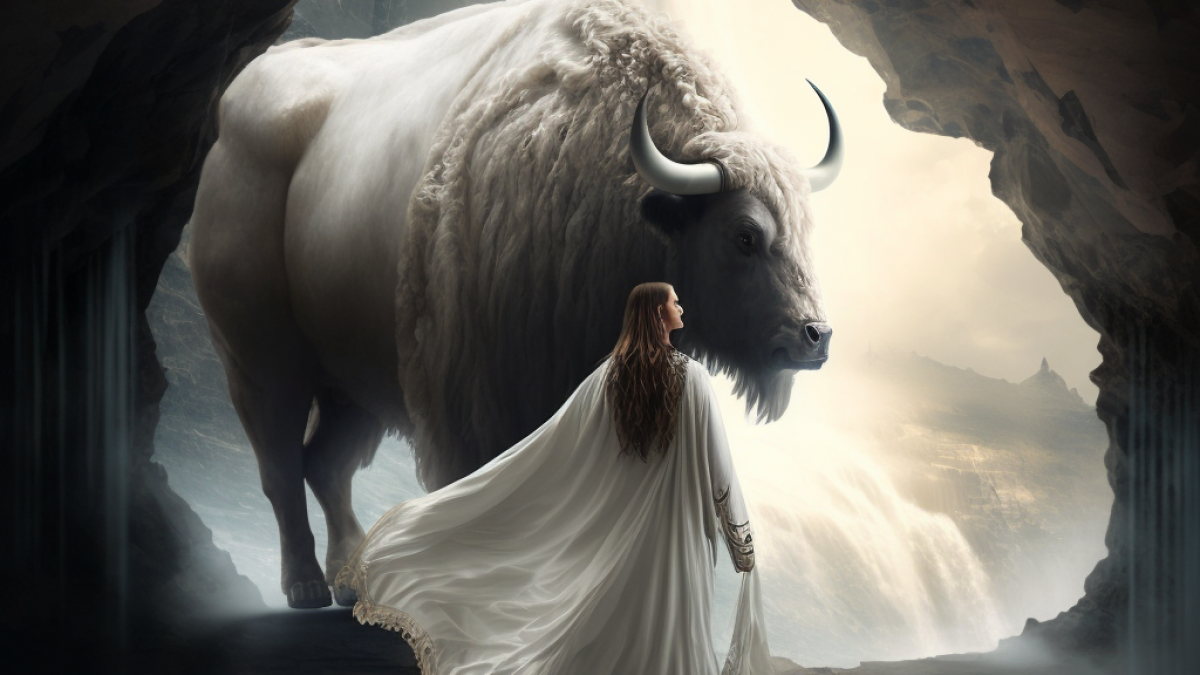 Many people consider the birth of multiple white buffalo calves in recent years to be the fulfillment of the prophecy made by the White Buffalo Woman.

A significant figure in the spiritual and cultural beliefs of many Indigenous peoples of North America, especially the Lakota Sioux, is White Buffalo Woman, also known as Pte Ska Win. The oral tradition of the Lakota people claims that at a time of extreme hardship and hunger, a woman known as White Buffalo Woman visited the tribe and taught them the holy rituals and ceremonies of the buffalo, which gave them a means of subsistence. She also handed them a sacred pipe, which is still regarded as a potent spiritual symbol and a useful tool for connecting with the afterlife and praying.

The late 1700s, when the Lakota Sioux were experiencing tremendous population loss as a result of sickness and conflict, is said to be when the legend of White Buffalo Woman first appeared. In the tale, White Buffalo Woman took the appearance of a lovely woman and appeared to two young men, teaching them the holy ceremonies and rituals that would bring the buffalo back to their hunting areas as well as the value of living in harmony with nature.

Among many Indigenous peoples of North America, White Buffalo Woman is still revered as a strong spiritual character and a representation of rebirth and optimism. Her tale is still passed down orally and honored in rituals and ceremonies.

I had no prior knowledge of White buffalo woman until she came to me one day. So little knowledge I had to ask her who she was! She shared her name and then she asked me to follow her through a field to a series of teepees. As we entered a busy village we went to the center teepee she asked me to enter before her. As I entered I found what appeared to be many wise women sitting in a circle around a fire. They had a few pipes they were passing around. As I came into the circle a younger boy draped a white buffalo cape upon me and left the teepee. White Buffalo Woman sat with us and they passed the pipes around for us to all puff on.

What I found amazing was the energy in the room. Everyone was silent but the level of telepathic conversation was new to me. Not one soul spoke aloud. They bantered back and forth some in spirit and then they each turned to me with reverence and explained why they brought me to their powwow. They shared that this would be my first initiation into Shamanism and that from here I would receive many more gifts with which to evolve. As each wise woman blessed me they would hand me the pipe to smoke.

I felt such an elevation of my body, mind, and soul one which it is difficult to describe with our words. The last blessing came from White Buffalo Woman and she explained that from this point forward I was one with them and would be given many opportunities with which to share the prosperity of their tribes. That much like them my life would be filled with challenges that appeared unjust but each time I would rise.

Her final words humbled me. She said, “You will be given this place with all and when our people rise again, as they always do, then you will hold space to restore our people to their prosperity.”